Phyllis Brotman, who began her public relations and marketing career at her kitchen table and became one of the most respected and influential women in Baltimore business and civic affairs, died Friday at Arden Courts. She was 79 and had been suffering from dementia.

Born in Baltimore to a pharmacist and a homemaker, Mrs. Brotman would inevitably become president of any club or organization she joined, in high school and at then Mary Washington College.

In 1966 she took all she had learned to Annapolis and successfully lobbied the legislature for the establishment of Maryland Public Broadcasting. Henceforth, the station announced on its first day of broadcasting, MPB would also stand for “Mrs. Phyllis Brotman.”

She also ran 176 political campaigns for John Heinz, Richard Nixon and Nelson Rockefeller, among others, and she won 169 of them, according to her daughter, Barbara Brotman Kaylor, who worked with her mother for many years.

Mrs. Brotman formed an alliance with mayor and then governor William Donald Schaefer and worked with him on a number of projects to promote the city.

Her fondest achievement, her daughter said, was her election as the first woman president of the Center Club, from 2003 to 2006, and the role she played in its revitalization. She was among the first women to demand entry into the club in 1980 because, those who knew her recalled, she knew that’s where business was done. The Center Club bills itself as “Baltimore’s premier private business dining club.”

Mrs. Brotman’s clients included Nottingham Properties, developers of White Marsh; Black & Decker and CareFirst, which she nurtured from a small doctors’ group into a major insurance firm. She was devoted to the Baltimore Symphony Orchestra and the Baltimore Museum of Art and was the outspoken vice chairman of the General Assembly Compensation Commission in 2001 when it voted to give legislators a 38 percent raise.

In 1997, Mrs. Brotman merged her firm, Image Dynamics, with Gray, Kirk/VanSant, one of Baltimore’s largest advertising agencies. She received an honorary doctorate from Towson University in 2007 and delivered the commencement speech, among her last public appearances. 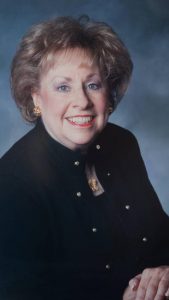