The Pollie Awards are the most prized and sought-after awards in the political communications and public affairs industries. Whether submitted by large consulting companies or individual consultants, this is the one arena where every piece of work is considered equal in competing for honors of excellence. AAPC salutes the 2013 Pollie Award Winners! 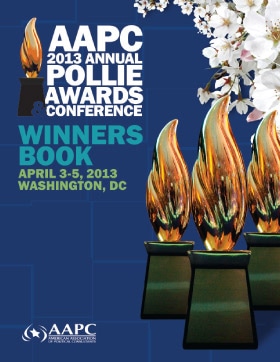 The Campaign Excellence Awards are a longstanding tradition of the AAPC and recognize those individuals that have significantly contributed to the success of a candidate or public affairs campaign and whose conduct has been consistent with the professional code of ethics of the AAPC. This year, we received 135 nominations in 15 categories from the AAPC membership and political consulting community at large. Each nomination was vetted by an Independent Panel of Judges and recommendations were voted upon and confirmed by the AAPC Board of Directors. AAPC salutes the 2013 AAPC Campaign Excellence Award Winners!

International Campaign of the Year
The Mellman Group, Yair Lapid/Yesh Atid – The Journey of One Reporter Who Changed the Face of Israeli Politics

Pollster of the Year – Democrat
The Mellman Group