Chester James Carville, Jr. is an American political commentator and media personality who is a prominent figure in the Democratic Party.

Carville’s winning streak began in 1986 when he managed the gubernatorial victory of Robert Casey in Pennsylvania. A loser in three previous attempts, dubbed the “Three-Time-Loss from Holy Cross” by the media, Casey defeated popular Lieutenant Governor William Scranton, Jr. in a remarkable come-from-behind win thanks to Carville. In 1987, Carville helped Wallace Wilkinson, who commanded less than 1% of the vote in the early polls, win a hard-fought gubernatorial campaign in Kentucky.

In 1991, Carville—who had already become prominent in political circles—drew national attention when he led Senator Harris Wofford from 40 points behind in the polls to an upset landslide victory over former Pennsylvania Governor and U.S. Attorney General Richard Thornburgh. With the startling and unpredicted Wofford win, Carville exposed the political vulnerability of George Bush, who enjoyed 91% approval ratings during the Gulf War.

Having wounded the sitting President in 1991, Carville finished the job the following year when he guided William Jefferson Clinton to the Presidency in 1992. In 1993, Carville was honored as Campaign Manager of the Year by the American Association of Political Consultants for his leadership of Clinton’s fearsome and intense “War Room” at campaign headquarters in Little Rock. Carville was also the focus, along with George Stephanopoulos, of the feature-length Academy Award nominated documentary The War Room.

James Carville is also an author, actor, producer, talk-show host, speaker and restaurateur. Author James Carville, (with co-author and wife Mary Matalin, former Assistant to President Bush and Counselor to Vice-President Cheney), first wrote All’s Fair: Love, War, and Running for President, which spent eight weeks on The New York Times bestseller list. The book was also named one of the top 5 best books on Public Relations by the Wall Street Journal. Carville’s other books have included We’re Right, They’re Wrong: A Handbook for Spirited Progressives; And the Horse He Rode In On: The People vs. Kenneth Starr; Stickin’; Buck Up, Suck Up…and Come Back When You Foul Up; Had Enough? A Handbook for Fighting Back; his children’s book, Lu and the Swamp Ghost; and 2006’s Take it Back.

In the fall of 2003, actor James Carville and wife Mary Matalin put a fresh and critically-acclaimed spin on political consulting and on television in the HBO series “K Street”, a political drama based on the working lives of Washington political consultants. In addition, Carville can be seen regularly on television as a CNN commentator and contributor.  Carville also co-produced the remake of the 1949 Oscar award-winning movie “All The King’s Men” with a cast that included such acting luminaries as Sean Penn, Anthony Hopkins, Jude Law, Patricia Clarkson, Kate Winslet, and James Gandolfini.

James Carville resides in New Orleans with his wife and two daughters. 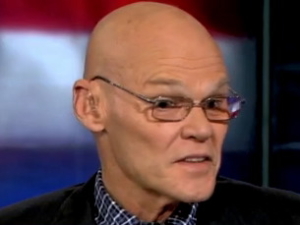