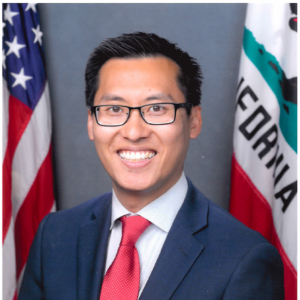 In 2016, Vince Fong was elected to represent the 34th Assembly District, which encompasses most of Kern County.

Vince began his career with Congressman Bill Thomas, Chair of the Ways and Means Committee, working on international trade policy. He then returned home to serve the residents of Kern County.

For nearly a decade, Vince served as the district director to House Leader and Congressman Kevin McCarthy, until Vince was elected to the State Assembly in 2016.

Vince is a lifelong resident of Kern County. He earned a bachelor’s degree from UCLA and masters from Princeton University. He serves on the boards of the Jim Burke Education Foundation and Honor Flight Kern County where he works to send WWII, Korean War and Vietnam Veterans to Washington, DC to see their memorials.