David Axelrod is a political consultant and strategist recognized for creating a winning campaign strategy for U.S. President Barack Obama.

In 1984, David Axelrod’s campaign management team helped win Congressman Paul Simon a seat in the U.S. Senate. Axelrod has since led successful campaigns for numerous Democrats, and his client roster includes such names as Bill and Hillary Clinton. Axelrod has also gained national repute for helping African-American politicians get elected in landmark victories, most notably Barack Obama. Axelrod served as senior advisor to President Barack Obama, senior advisor to the Obama-Biden Presidential Transition, senior strategist to Barack Obama’s historic campaign for the presidency in 2008 and his 2012 re-election campaign. Today he serves as the Director, Institute of Politics at the University of Chicago.

Early LifeDavid Axelrod, most widely recognized for creating a winning campaign strategy for U.S. President Barack Obama, was born on February 22, 1955, in New York City, to parents Myril and Joseph Axelrod. His mother was employed as a newspaper journalist and his father worked as a psychologist.

Axelrod was motivated by a sense of idealism at an early age. At 5 years old, he witnessed an inspiring speech by John F. Kennedy in New York which would set his life on a political course. Axelrod credits this formative experience with arousing a life passion for politics, and in 1972 Axelrod moved to Illinois to study political science at the University of Chicago. There, he met his future wife, Susan.

Upon graduating from college, Axelrod began working for the Chicago Tribune. In 1981, by the age of 27, he gained acclaim for being the youngest political writer in the newspaper’s history. After eight years of political reporting, Axelrod left the paper to pursue a career in campaign consulting. Axelrod began to make a name for himself in 1984, when his campaign management team won Congressman Paul Simon a seat in the U.S. Senate. The following year, Axelrod capitalized on his knack for political campaign planning when he co-created the consulting firm Axelrod & Associates (later known as AKP&D Message and Media). Axelrod has since led successful campaigns for numerous Democrats, helping many politicians get elected at the local, state, and federal level. Axelrod’s client roster includes such names as Bill Clinton, John Edwards, and Hillary Clinton.

Over the course of his career, David Axelrod has gained national repute for helping African-American politicians get elected in landmark victories. Axelrod’s progressive liberalism; reputation for political idealism; and innovative bottom-up, technology-laden campaigning policies have made him a top political media expert with an aptitude for African-American campaigning. Axelrod’s first significant experience in race-related campaigning was his work with Chicago Mayor Harold Washington in 1987. Washington’s first campaign for mayor four years earlier had been a fervent struggle against racial prejudice, ending with Washington becoming the first African-American mayor in Chicago history. Thus, when Mayor Washington hired Axelrod’s company to manage his re-election campaign, Axelrod focused on preserving Washington’s popularity amongst the African-American community while increasing the white vote from 8 percent in 1984 to 20 percent in 1987. Many believe that AKP&D Message and Media’s campaign for Mayor Washington left a deep impression on Axelrod to push for racial equality in politics.

And push he did, across decades and across all levels of government, culminating with Axelrod’s most defining accomplishment to date: The media management of Barack Obama’s 2008 race for U.S. president. Axelrod and Obama first met in 1992 working amongst Democratic leaders in Chicago. Obama was a community organizer, working on increasing voter registration in Chicago’s underprivileged neighborhoods. In 2003 Barack Obama ignored Axelrod’s advice to run for mayor of Chicago and instead convinced Axelrod to join his campaign as a strategist during his race for the Senate. Seeing great promise in young Obama, Axelrod was credited with assembling the campaign management team that succeeded in getting Obama elected as a U.S. senator for Illinois in 2005.

When Barack Obama decided to run for the U.S. presidency, Axelrod was again chosen as the man to run his media strategy. During the presidential election, David Axelrod was credited with revolutionizing modern day campaigning. Astute enough to realize America was looking for a fresher, more progressive president who could unite the nation and inspire even the most apathetic and ambivalent citizens, Axelrod implemented a “bottom-up” grassroots campaign style. He ingeniously created short television biographies of Obama as the quintessential face of the American dream. Axelrod’s television biographies made a virtually unknown Barack Obama accessible to America, assuring the nation that the presidential candidate would work diligently to unite races, political parties, and foreign nations. Axelrod also promoted Obama as the bipartisan face of change by implementing other technology-laden campaign tactics. Spanish radio advertisements began to run in states with high Latino populations, and huge pockets of traditionally overlooked voters were mobilized through the internet and cellular phones, turning countless citizens into grassroots volunteers.

A staunch believer in Obama’s capacity to inspire change, Axelrod strategically transmitted his vision of Obama’s leadership to America with effective, pioneering campaign tactics, landing Obama a decisive and historic victory in 2008. As Barack Obama became the first African-American president in U.S. history, Axelrod saw similarities between President Obama and the trials felt by the late African-American Chicago mayor Harold Washington. “In many cases their personal stories are symbolic of the kinds of values that we as a society hold dear even if we haven’t always honored them historically,” Axelrod said. “They’ve seen the obstacles and the barriers and they’ve also overcome them: It shows the work we have to do and the possibility that that work can get done, that you can work for a better future.”

Consequently, Barack Obama and David Axelrod’s mantra of “change” has landed them both in the White House with the responsibility of executing the campaign’s “Yes We Can” sentiments. Axelrod recently accepted Obama’s offer to become his chief political adviser, where he will continue in his role as Obama’s image architect and sage adviser.

In 2015, Axelrod’s first book, Believer: My Forty Years in Politics, was published and became a New York Times bestseller. 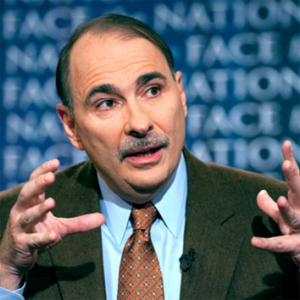