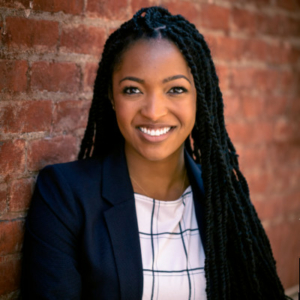 Domonique’s political career began as an organizer on President Obama’s campaign, ultimately serving as Deputy White House Liaison to the Environmental Protection Agency. Before that, Domonique worked as the Director of Business Development at Audience Partners (now A4 Media), a digital advertising company. There she oversaw nearly 200 campaigns in politics, issue advocacy, and public affairs.  Domonique has a cross-sector carer in corporate, politics, nonprofit, and advocacy counting First Data Corporation (now Fiserv), MillerCoors, and Girls Who Code as previous employers. Notably, she was part of a coalition that secured $30 million in appropriated funds for paid congressional internships to diversify the pipeline of future public servants.

Domonique is a sought-after political strategist, having served leaders and organizations from coast to coast and at national and local levels. For her impact, Domonique has been recognized by the Professional Women in Advocacy (now Women in Government Relations), a Rising Star by Campaigns & Elections Magazine, and a Top 40 under 40 Consultant by the American Association of Political Consultants (AAPC).  She further served as a juror in the North American Excellence in PR Awards and currents trains for the National Democratic Training Committee.

Domonique is a graduate of Spelman College, a historically Black college for women, and The Campaign School at Yale. She also co-chairs the AAPC’s Committee on Political Free Speech and holds advisory roles at Buzzfeed and College to Congress.